“Muntakhab Ahadith A collection of selected Quranic verses Prophet (S.A.W) teaching relating to : Kalima Tayyibah ,The Salat , Ilm and Dhikr , Ikram-e-Muslim, Ikhlas-e-Niyat and Dawah. Sheikh Muhammad Yusuf, Who had a very profound and comprehensive knowledge of books of Ahadith, has collected all the relevant principal, rules and precautions from their original sources in the form of a book. It is a selection of authentic Ahadith, relating to the six qualities of Dawat and Tabligh. This work was originally done in Arabic by M. M. Yusuf Kandhlavi (R.A.). He collected all the relevant principles, rules and precautions from their original sources. This translation of Muntakhab Ahadith has been done by a board of Islamic Scholars, is ready reference to guide the mankind towards the righteousness and forbidden all evil deeds for the development.
“

” All praises to the Sustainer of the worlds, and grace, honour and salutations on the Chief of Apostles and Seal of Prophets, Muhammad, his family, companions and those who followed him in an excellent manner and invited mankind towards Allah, till the Day of Resurrection.
This is a reality which can be stated without any ambiguity and exaggeration that in the lslamic world of today the most powerfull, useful and all-encompassing effort, is the struggle of the Tablighi jamaat whose center is situated at the Tablighi Markaz Nizamuddin, Delhi (India). The scope of this effort and its impact is not restricted to the India subcontinent, or Asia, but extends to many continents and to a host of Islamic and Non-Islamic states.
The history of such campaigns and revolutionary or reformative movements shows that, after passage of a period of time, or when the scope of the effort enlarges greatly (especially when, by means of it, the attainment of certain advantages and leadership becomes apparent) then such weaknesses, unwanted objectives and neglect of the original goals set in, which reduce or even totally wipe out the true influence of the work.
However, the Tablighi effort (as far as the knowledge and observations of the writer Concern) has, to a large extent been saved from these tribulations up to now.
It is quite evident that the nature of this movement is based on giving others priority over oneself (despite one’s dire needs), a passion for sacrifice, a quest for the pleasure of Allah, a desire for reaping rewards in the Hereafter, respect and honour of Islam and Muslims, humility and submissiveness to Allah, the proper fulfillment of religious obligations, With a desire for further advancement, a preoccupation with the remembrance of Allah, refraining as fa’8r as humanly possible from unprofitable and unnecessary preoccupations and undertaking protracted journeys, while enduring all sorts Of hardships for the pleasure of Allah have become a regular practice.
These special characteristics and distinctions of this work are attributable to the sincerity of its first preacher (Sheikh Muhammad Ilyas Rahimatullahi ‘alaih), his preoccupation with Allah, his prayers, struggle, sacrifice and above all, the acceptance of this work by Allah the Exalted. Beside this, it is also a consequence of those principles and preconditions which-were declared essential by its first preacher from its very inception and on which he always insisted and propagated. To think about the meanings and responsibilities inherent in the Kalimah, to acquire knowledge of the virtues of fulfilling all forms of obligatory worship a consciousness of the virtues of knowledge and the remembrance of Allah along with a preoccupation with the remembrance of Allah, respect for Muslims with an appreciation and fulfillment of their rights, to correct the motives behind every action so that it is done sincerely ‘and solely for the pleasure of Allah, to refrain from all that is irrelevant, and an enthusiasm and consciousness of the virtues of travelling in the path of Allah, These are those elements and characteristics which have protected this movement from becoming a political material organization, and in geared for obtaining material benefits, fame and Author Name(s)ity has remained a purely religious movement aimed at attaining the pleasure of Allah.
These principles and elements, which have been considered essential for this movement, have been derived from the Quraan and Sunnah. They serve as its guardians to obtain the pleasure of Allah and protect Deen (religion) and their sources are the Quraan and Prophetic practices and traditions.
There was thus a need that all the relevant Quranic verses and Ahadith (Prophetic practices and sayings) be compiled in a book. Praise be to Allah, that the second preacher of this movement of inviting towards righteousness, Sheikh Muhammad Yusuf (son of the first preacher, Sheikh Ilyas Rahimatullahi ‘alaih) who had a very profound and comprehensive knowledge of books of Ahadith, has collected all the relevant principles, rules and precautions from their original sources in the form of a book. He has been so comprehensive and-extensive that this book is not merely a compilation of these principles rules and instructions, but perhaps an encyclopedia, in which without being selective or brief, all of these have been mentioned with their relative importance. It is perhaps the will of Providence that the writer’s fortunate and worthy grandson Sheikh Sa’ad, (May Allah prolong his life and bless him with further works of this nature), has assumed the responsibility of publishing this book for general benefit. May Allah Ta’ala grant acceptance to this effort and service, and make it most beneficial. And this is not hard for Allah
Abul Hasan ‘Ali Nadavi
Dairah Shah ‘Alhamullah
Rai Baraily U.P.
20 Dhi Qa’adah 1418 H
“

Teaching Of The Holy Prophet (S.A.W) For A Perfect Living – (English/Arabic) – (PB) 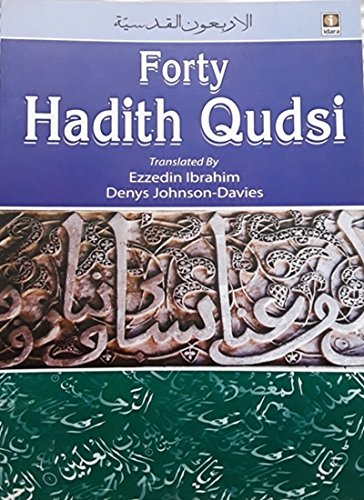